My kids are older now but I remember all too well the last minute panic of needing a school treat.  I can’t exactly remember what grade my Tater was in but it was well past 9 p.m. on the night before his Halloween party that he informed me that we needed to bring something for every student the next day.  For the life of me I have forgotten what I pulled together but somehow I waved my {not so} magic wand and dessert appeared before he woke up.  Needless to say, there wasn’t much sleep for mama that night.  I only wish I had thought of Halloween Brownie Bites then. 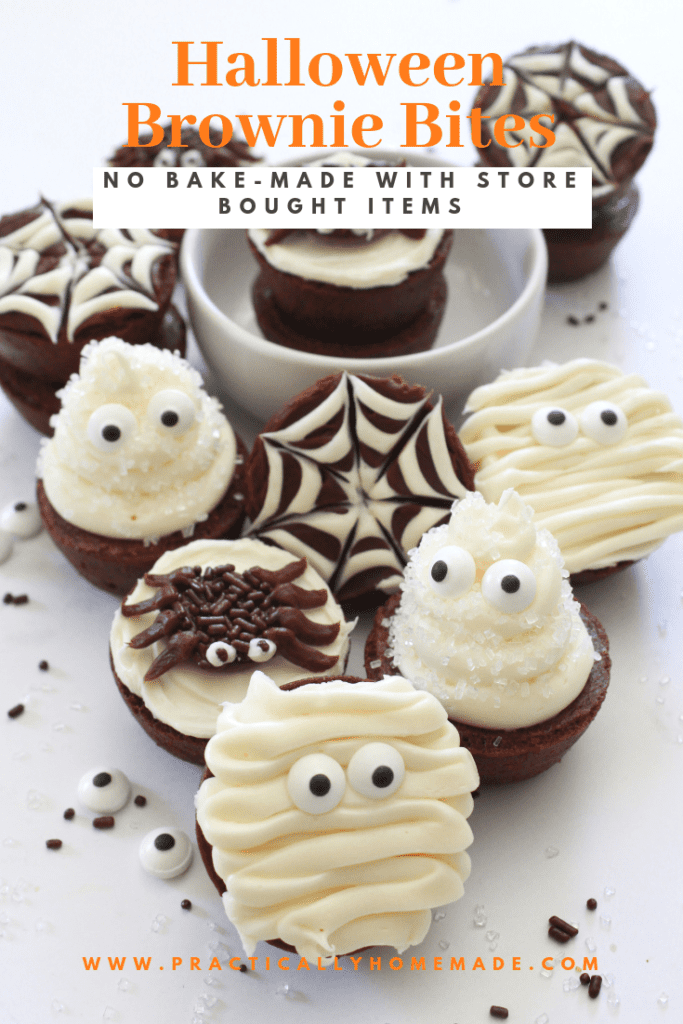 Now my Tater is a junior in college and I have nothing but wonderful memories of those crazy days but I also have this platform…my blog, Practically Homemade.  A place where I feel like I can help mamas {like myself} not only get through those last minute moments…but ROCK THEM!  Everything you need to make these treats can be found at the grocery store and I promise even a novice decorator can do this!  So lets go…

The grocery store list is simple.  Brownie bites, edible eyeballs, melting wafers, chocolate sprinkles and chocolate and vanilla frosting.  I used small Ziploc bags for decorating bags but you could purchase them as well. 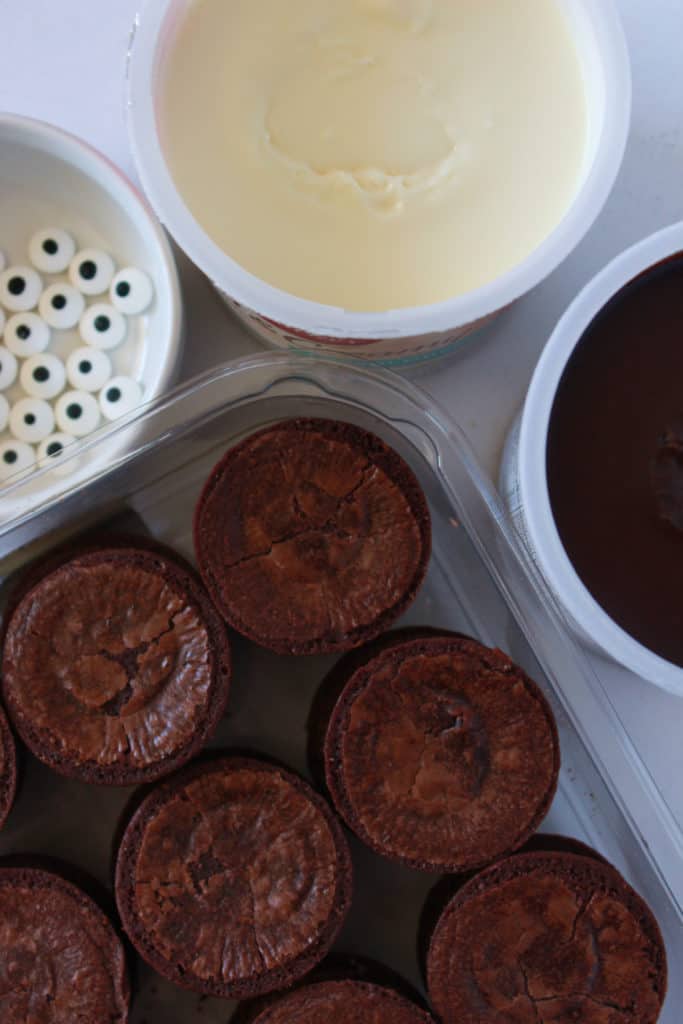 The ghosts are the most simple to make because they are just a tall swirl of vanilla frosting {I added sprinkling sugar} and edible eyeballs.  Be sure to cut a fairly large hole on the corner of your bag so that you get a wide swirl.  So sweet! 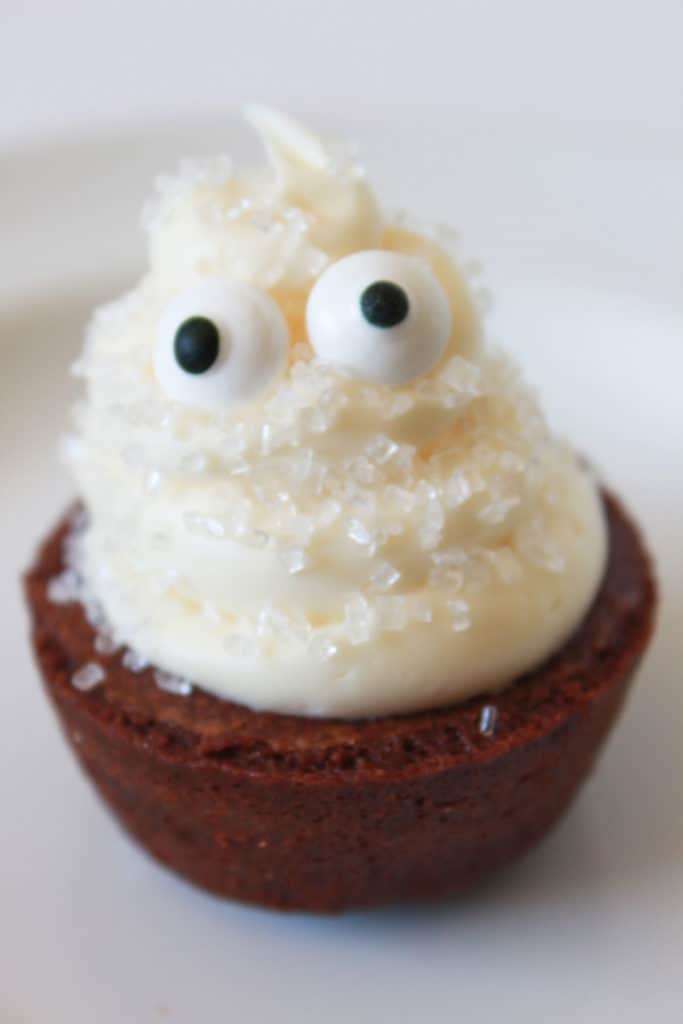 Making the spider webs is simple too.  I put a coating of chocolate frosting on the top of the brownie bite and then piped a thin swirl of vanilla frosting over the chocolate. 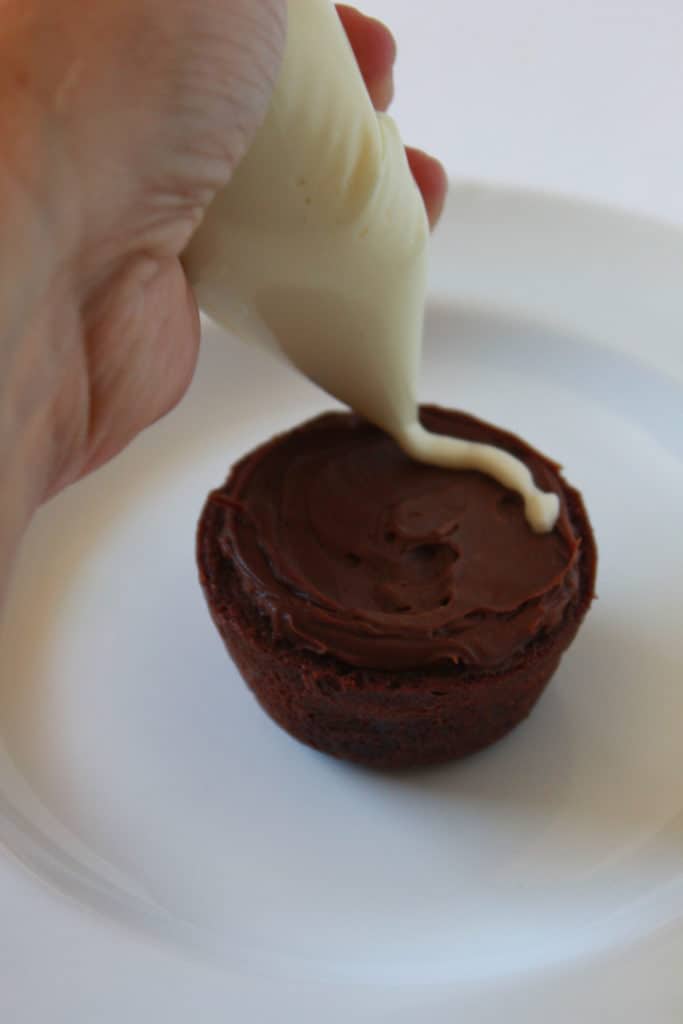 To finish them, all you need is a toothpick.  Start at the middle of the brownie and pull the toothpick to the edge.  Continue to do that 5 or 6 times, being sure to clean the toothpick off with a paper towel every time you start again. 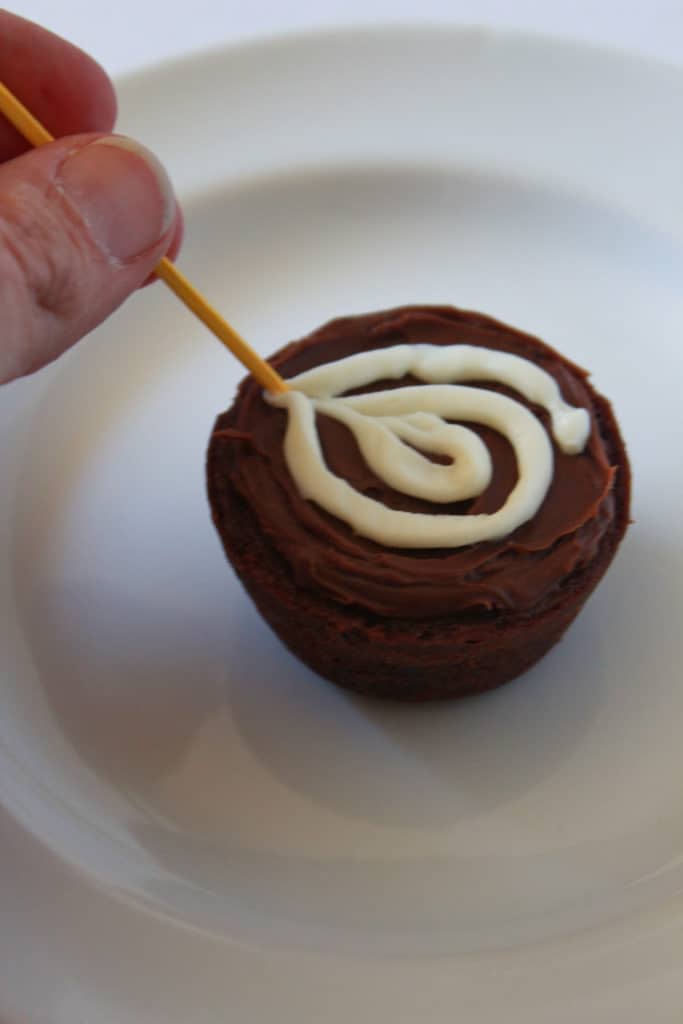 If you wanted to take them a step further then you could always add a M&M to the middle of the web for a spider. 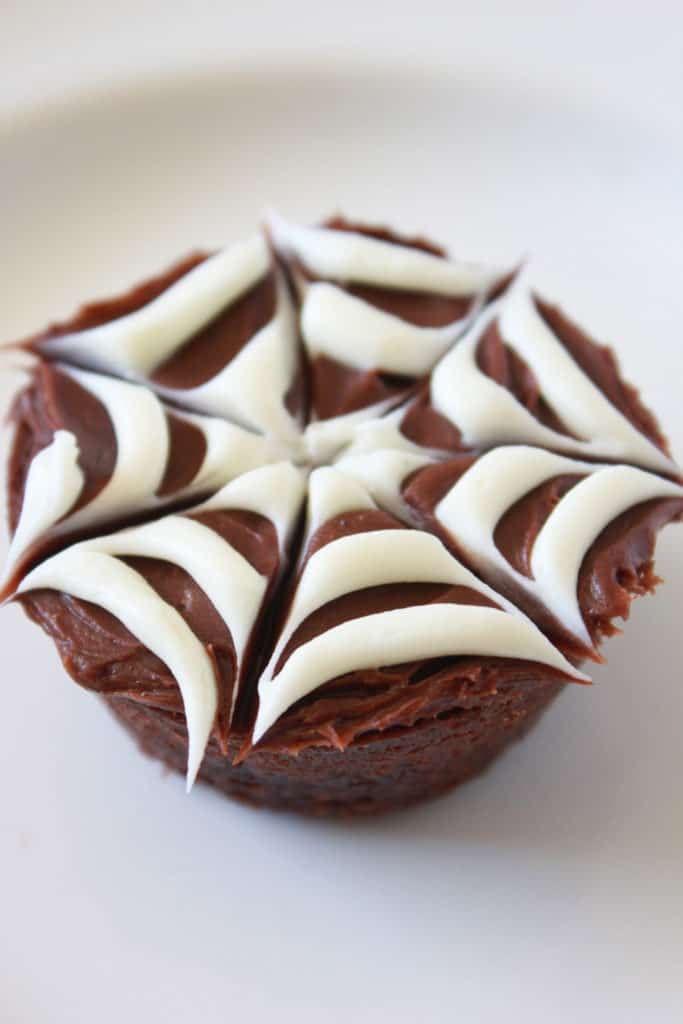 We couldn’t make Halloween goodies and not make a mummy.  I started by putting a layer of vanilla frosting on the top of the cupcake, so that there was a white base.  Then using the same bag of white frosting that I used for the spider web, I made a zigzag pattern over the entire brownie.  Then I went over it again in the opposite direction {it should look like layers}. 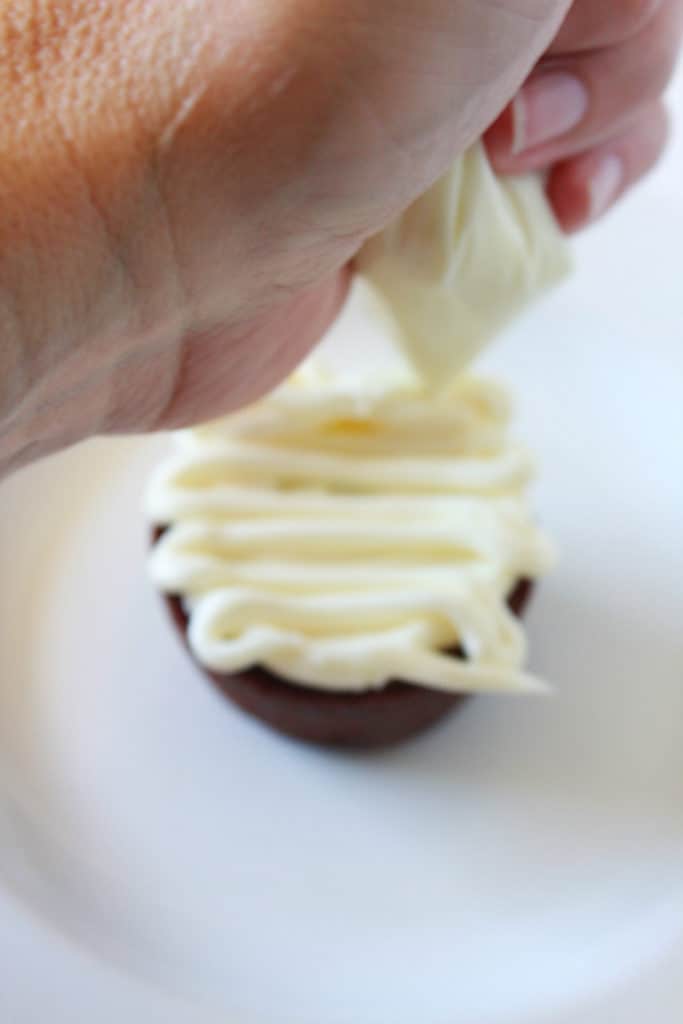 A couple of edible eyeballs and they are mummilicious!! 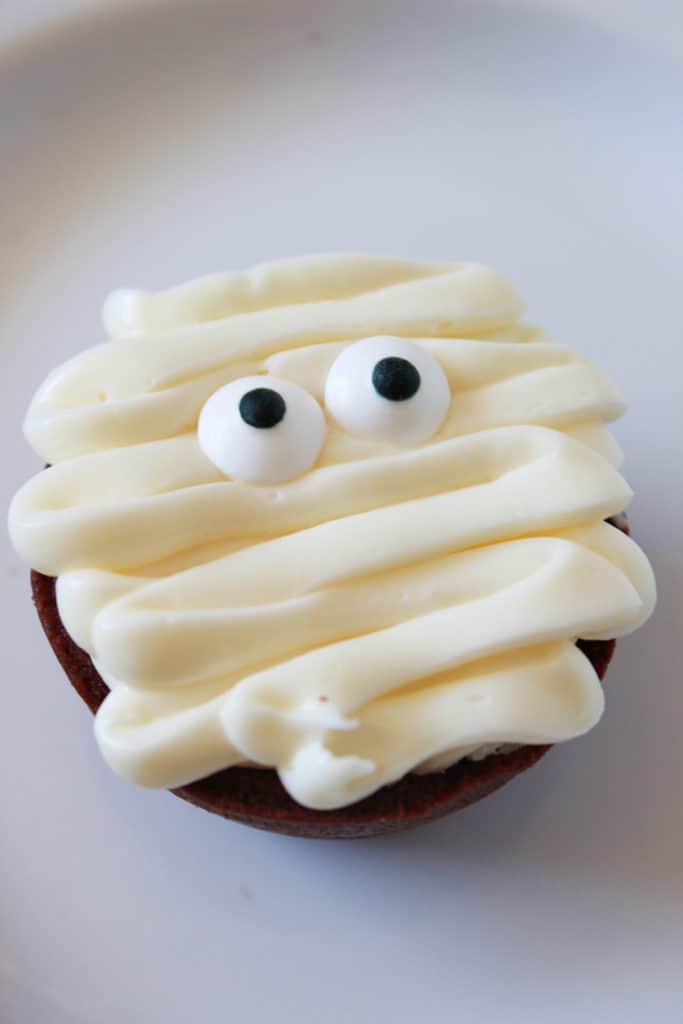 Now the spiders might be a little harder than the rest but don’t that stop you.  I put a layer of vanilla frosting on the top of the brownie and then put a melting wafer on the frosting {so it will stick}. 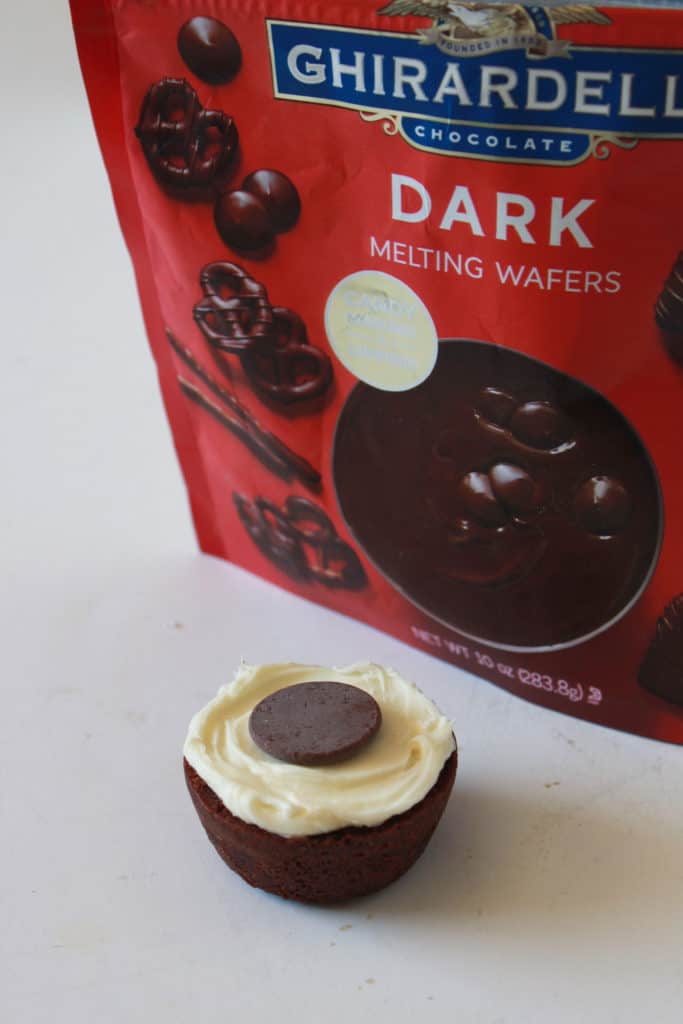 I made a bag of chocolate frosting with a small opening and covered the top of the wafer with frosting.  Then I turned it over and covered it in sprinkles. 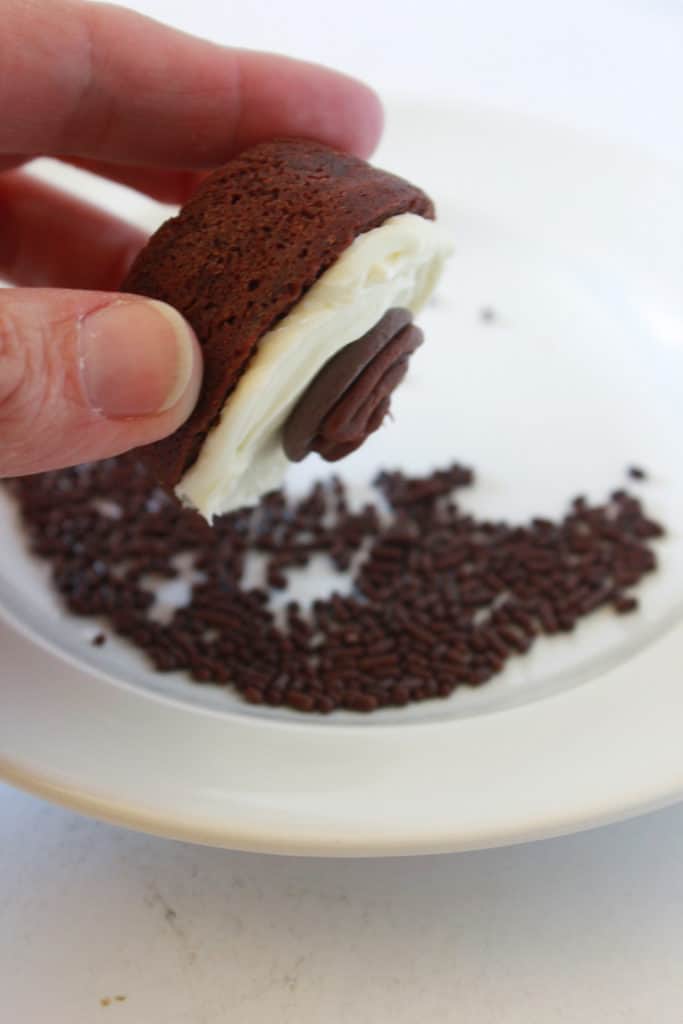 Using the same bag of chocolate frosting I piped 8 legs on the spider. 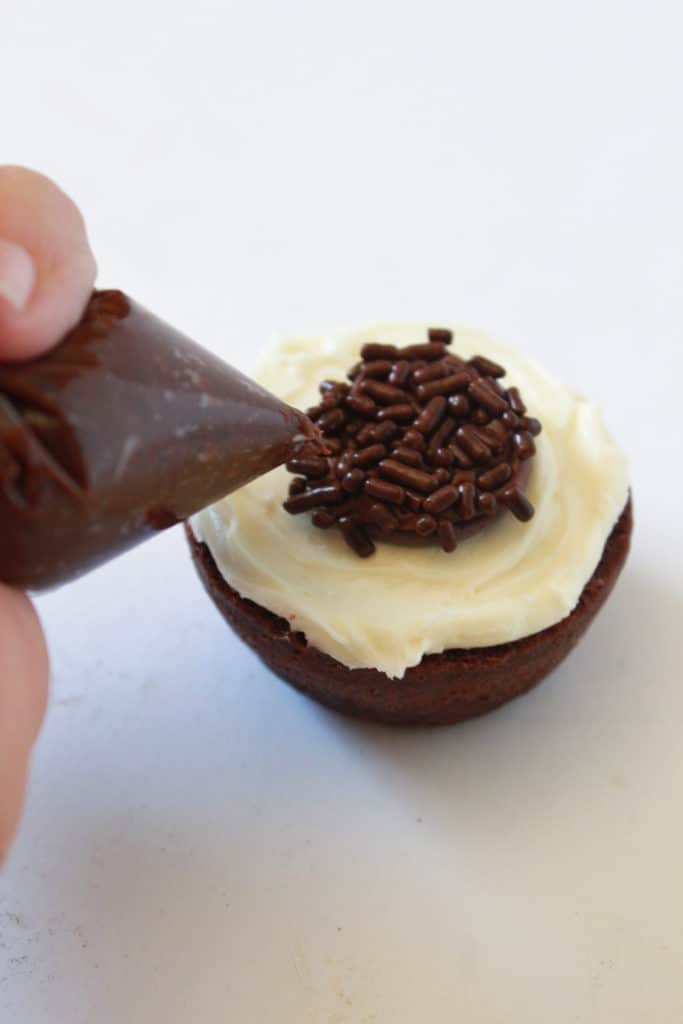 Instead of using edible eyeballs, I just put a small dot of vanilla frosting and a chocolate sprinkle.  All finished. 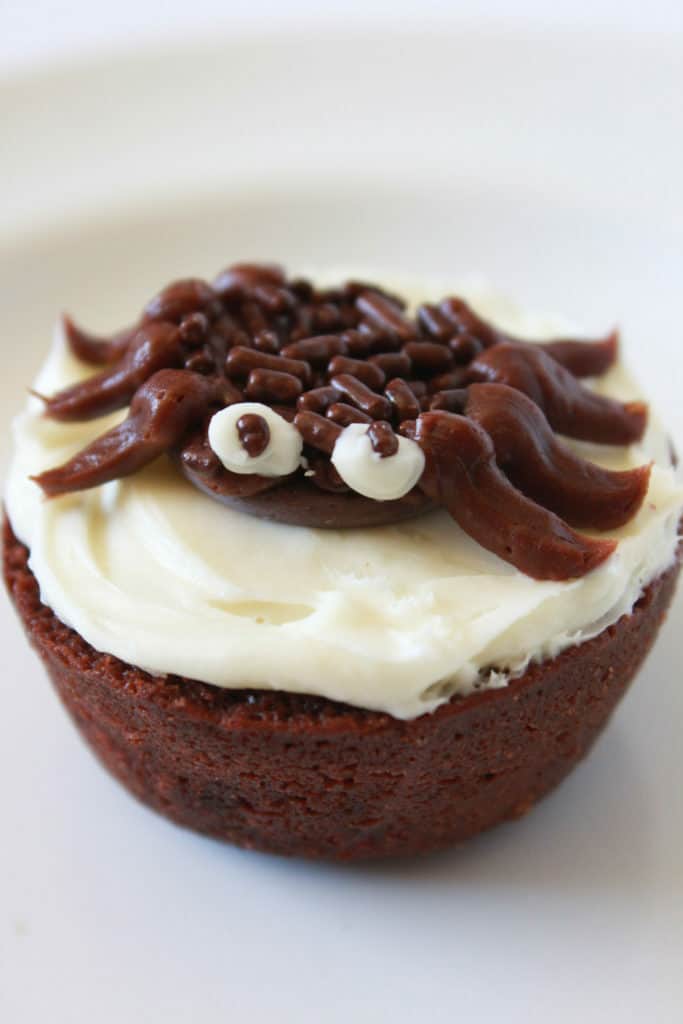 Look at how cute these Halloween brownie bites are together! 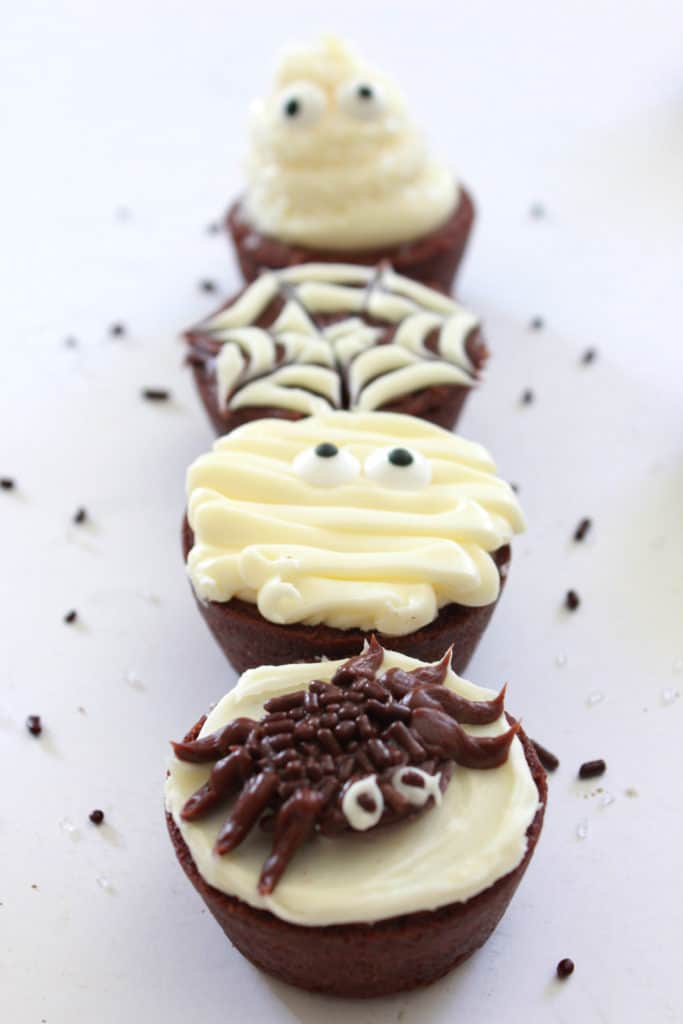 The perfect dessert when you are in a hurry…or even when you are not because they are so cute!!  Any party would be better with the addition of these babies.

If you are looking for other simple desserts than check out my recipes for Texas Sheet Cake Cookies and Kentucky Butter Cake Cookies, that are both made with a cake mix! 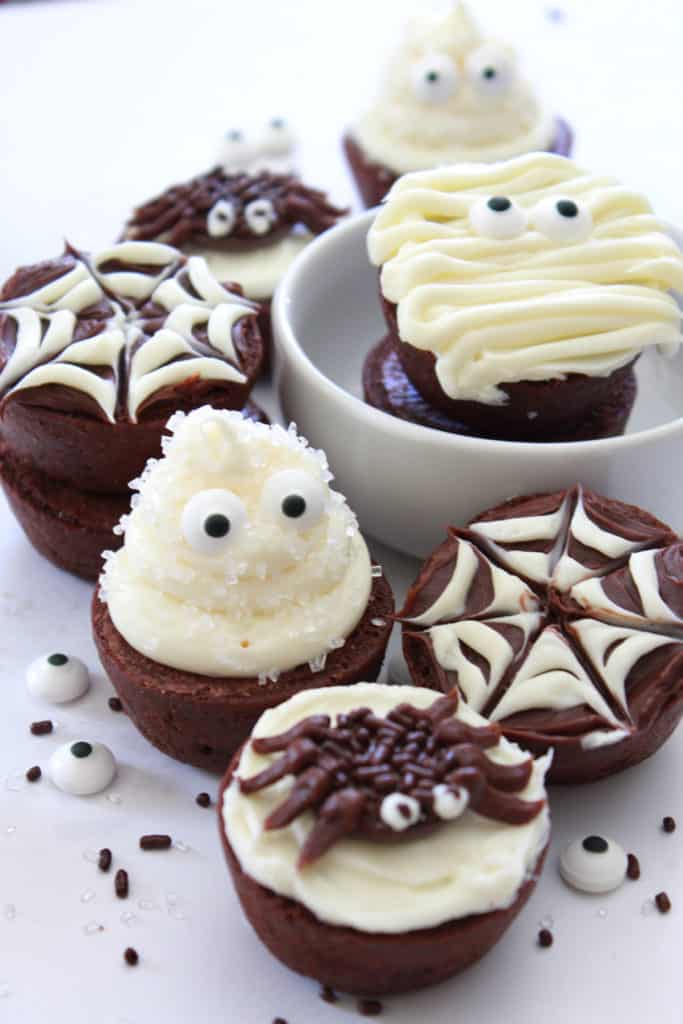 Brownie bites from the grocery store are transformed into Halloween ghosts, mummies, spiders and webs with canned frosting and edible eyeballs.  Simple and fun!

October 11, 2018 by June | Comments Off on Halloween Brownie Bites Recipe